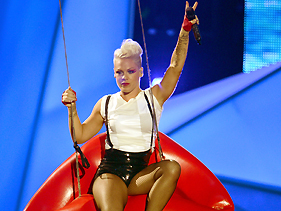 Fiesty friends pair up for The Truth About Love party track.

Pink can’t wait until Friday on her leaked track, “Here Comes The Weekend,” and the feisty pop star has found her perfect party partner in friend Eminem.

Aggressive, fist-pumping and full of Pink’s signature punk sass, the dance track bounces like a mosh-pit anthem about letting loose on the weekend. “I’m tearing up the night/ Lipstick and leather tight/ Not looking for a fight/ No /High heels and cherry wine/ Not wasting any time/ We’re ticking like a bomb/About to blow.”

Pink Reveals The Star Behind Her Album
She later declares on the chorus, “Here comes/ Comes the weekend hear it calling like a siren/ We don’t look for trouble/ Just enough to seeing double.”

Pink’s own party-filled bravado is met by Em’s on his verse, where he even shouts out fellow rappers, Diddy and Biggie. “I’m probably not gonna be wanting to pop bubbly or Ciroc/ I’m not Puffy, but Ima run the city tonight/ When I hit it, I might act like a freakin’ idiot/ Diddy mixed with a medieval knight, big city lights/ Little indignity, hot diggity/ This Biggie is gettin’ me hype,” he spits.

The track was produced by DJ Khalil, who worked with Em and Pink on his album, 2010’s Recovery. She appeared on “Won’t Back Down” off that release.

News of their The Truth About Love duet was confirmed back in August when she opened up about how it came together.

Em’s track isn’t the only duet on the album, out September 18. It also features appearances from Lily Rose Cooper (formerly Lily Allen on “True Love”) and Fun.’s Nate Ruess (on “Just Give Me a Reason”), as well as Pink’s baby girl, Willow.

“She plays bells on ‘How Come You’re Not Here,’ and she plays bass on a song called ‘Timebomb.’ She’s actually quite talented for a 13-month-old!” Pink said. “There was a basket of sh–, and she came over and pulled out the bells and started banging on them, and I was like, ‘Record it!’ And then she went up to the bass guitar on ‘Timebomb’ and started plucking away. She’s actually pretty good! She’s better on bass than I am! She plays piano, she bangs sh–, she’s either going to be violent or a percussionist … or a violent percussionist.”