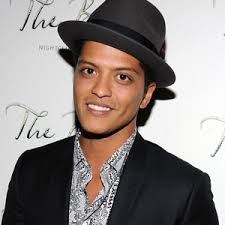 After working a string of behind-the-scenes jobs — including writing songs for Brandy, singing backup for the Sugababes, and impersonating Elvis — songwriter/producer Bruno Mars put his name on top of the charts in 2009 by co-writing Flo Rida’s hit song “Right Round.” One year later, he collaborated with rapper B.o.B on Nothin on You, and co-wrote Travis McCoy’s “Billionaire,” both of which became Top Ten hits. Mars used that momentum to launch a solo career, quickly becoming the first male vocalist in two decades to crack the Top Ten with his first four singles.
Born Peter Hernandez in Honolulu, Hawaii, Mars kicked off his career at the age of four by fronting his uncles band, becoming Oahu’s youngest Elvis impersonator in the process. Ten years later, he was impersonating the King of Pop, Michael Jackson, as part of the Legends in Concert show. After graduating high school in 2003, he took his uncle’s advice and moved to California to pursue a music career. After months of frustration, he met songwriter Phillip Lawrence, who convinced Mars to try his hand at writing songs for other artists. The two dubbed themselves the Smeezingtons and co-wrote Long Distance, which was recorded in 2008 by R&B singer Brandy. More offers arrived after that, and Mars and Lawrence scored their first number one hit in 2009, when they co-authored Flo Rida’s international smash “Right Round.”
By 2010, Mars seemed to be everywhere: singing alongside B.o.B on the chart-topping “Nothin’ on You,” co-writing Travie McCoy’s “Billionaire,” and collaborating with Cee-Lo Green on the Grammy-nominated hit “F*ck You!” He also began issuing his own material, starting with the May 2010 release of his first EP, It’s Better If You Don’t Understand. Doo-Wops & Hooligans, Mars’ full-length debut, appeared later that year and quickly produced a number one single, “Just the Way You Are.” In 2012, Mars both hosted and performed as a musical guest on Saturday Night Live, debuting tracks from his upcoming album.
That album, the genre-jumping effort Unorthodox Jukebox, was released that same year, and featured the lead-off single “Locked Out of Heaven,” along with production from Mark Ronson, Diplo, and others. “Locked Out of Heaven” topped the pop charts, and the album reached number two in the U.S. (The second single, “When I Was Your Man,” also hit number one.) All that success made Mars a natural for one of the world’s most prestigious gigs, the halftime show for Super Bowl XLVIII in February 2014, where he performed with Red Hot Chili Peppers as a musical guest and drew record ratings. Also in 2014, Unorthodox Jukebox won a Grammy Award for Best Pop Vocal Album.