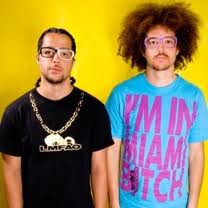 An electro-hip hop band artists formed in Los Angeles: They consists of a DJ and a rapper, that Redfoo (Stefan Gordy, September 3, 1975) and Sky Blue (Skyler Gordy, August 23, 1986), respectively the son and the nephew of the producer Berry Gordy.

In the jargon of the Internet and online LMFAO stands for “Laughing My Fucking Ass Off” (“laughing out loud with my fucking ass out”). The name derives from a conversation between the Internet and Sky Blue Redfoo Their first single, entitled “I’m in Miami Bitch” (censored version “I’m in Miami Trick”) has reached the position No. 51 on Billboard Hot 100. On July 1, 2008, published LMFAO Party Rock EP on the iTunes music store. Their full-length album Party Rock was published July 7, 2009 and contains 15 tracks. Their second single, “La La La”, debuted at No. 62 on Billboard Hot 100. Their third single, “Shots” has now reached the position 24 on the Billboard Hot 100. LMFAO I have worked in many other songs including the remix of Love Lockdown by Kanye West and Love Game by Lady Gaga, Gettin ‘Over You David Guetta and Outta Your Mind by Lil Jon. In 2010 he made ​​from open-act at concerts in America, the Black Eyed Peas.

At the parade the Stanley Cup (hockey) in Chicago in 2010, Kris Versteeg sang a new version of their song Yes. In 2011, they released Party Rock Anthem tube which then becomes a worldwide hit, and the clip is broadcast around the world. LMFAO last ranking of albums and singles sold in the month of July on the American market, according to Billboard for the week of reference to be July 30 2011. The Billboard Hot 100 Chart is the almost the same with “Party Rock Anthem” LMFAO Ft. Lauren of Bennett & Goon Rock remains at the top for the second consecutive week.