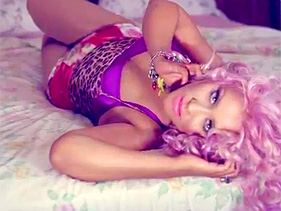 Based on early sneak peeks, we were pretty certain Christina Aguilerawas going to revisit her previous bad-girl roles in the brand-new “Your Body” video … but, wow, we definitely weren’t expecting this.

In the clip, Christina plays a candy-colored killer, one who delights in wooing well-physiqued men to their demise. She hitches a ride with one guy, seduces him, then sets his car ablaze (in electric-pink flames, nonetheless). Next, she hits a dive bar, shoots some stick, and lures her next victim into a bathroom stall, where she bludgeons him to death, leaving spatters of blue paint dripping from the walls. And finally, in one of the video’s most striking scenes (literally), she uses a bat to bash a dude’s brain in, showering the room in a mist of red confetti.

Of course, there’s not actual violence shown; instead, director Melina Matsoukas — who’s done equally eye-catching clips for the likes of Lady Gaga and Rihanna — fills “Your Body” with brightly-colored, almost surreal gore. In that regard, the video is reminiscent of Oliver Stone’s “Natural Born Killers,” which, while plenty brutal, felt more like a cartoon … you couldn’t believe the carnage because it gushed forth in such hypnagogic hues (of course, “Your Body’s” trailer-park trappings also bring to mind Beyoncé’s “Party” clip).

There is also no shortage of junk-culture nods, like the old NES Advantage controller Aguilera jams on, the odd (and, one can assume, coffer-filling) cameos by psychic site Oranum.com, sugar-coated cereals, and trashy day-time television, to say nothing of Christina’s wardrobe, loaded with leopard prints and Day-Glo accoutrements and very trailer chic.

And while Aguilera has certainly worn all manner of eye-catching get-ups in the past, here her costumes aren’t meant to be standalone shock pieces; they all play into the larger feel of the video itself, which, sure, is grisly and garish, but also incredibly clever and visually arresting. It tweaks societal standards, plays to our baser instincts, and burns brightly across the brain. Once again, Xtina proves she’s really good at being bad, but she’s never done it with tongue so firmly planted in cheek (I love the “No Men Were Harmed in the Making of this Video” warning at the beginning). Subtlety isn’t her strong suit, and so long as she keeps churning out videos as good as this one, we’re willing to accept that about her. Then again, judging by the amount of bodies she leaves in her wake, it’s not like we’d be willing to tell her otherwise.