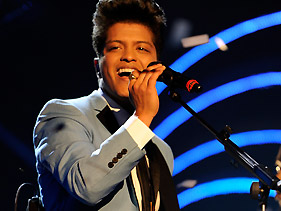 Singer/songwriter will premiere new song ‘Locked Out of Heaven’ on Monday during a Google+ Hangout.

We hope you’re ready for some brand-new Bruno Mars music, because we’re only a few days away from a first listen to his next single, “Locked Out of Heaven.”

Mars will unleash “Heaven” upon the masses Monday during a live chat and Google+ Hangout at 7 p.m. ET, during which the Grammy winner will talk about the new track as well as answer fan questions. You can participate in the conversation by asking the singer/songwriter a question via Twitter with the hashtag #AskTheDragon.

In the meantime, make sure to check out the brief teaser video for the track, which features behind-the-scenes footage of Mars in the recording studio, laying down vocals and playing piano. We don’t get to hear too much of the song, except for about 25 seconds of the backing track, which is uptempo with a much more edgy and rock vibe than his previous pop tunes.

No word on the specifics of what Mars will address during his chat next week, but given the recent excitement he’s expressed on Twitter about the completion of his sophomore album, we’re betting he’ll be announcing either the album title, its release date or both.

Mars’ fans are eager for new music, since it’s been two years since the crooner released his Grammy-nominated, certified-platinum album Doo-Wops & Hooligans, which produced several radio-friendly hit singles like “Just the Way You Are,” “Grenade” and “The Lazy Song.”