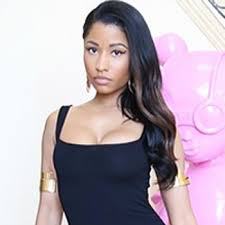 Born in 1982, Nicki Minaj grew up with an abusive, drug-addicted father. After attending La Guardia High School for the Arts, she was introduced to rapper Lil Wayne, who launched her career. Her 2010 debut album, Pink Friday, and her single, “Your Love,” topped the Billboard charts. A frequent “cameo” singer, Minaj’s voice was featured in seven songs on Billboard’s Hot 100 in 2010. In 2012,

Minaj was announced as one of the new judges of the popular singing show American Idol (season 12).

Hip-hop artist and singer Nicki Minaj was born Onika Tanya Maraj on December 8, 1982, in Saint James, Trinidad and Tobago, and moved with her family to Queens, New York, when she was 5 years old. Minaj’s father was a severe drug addict with a long history of violence. At one point, he set fire to the family’s home in a failed attempt to kill Minaj’s mother. Those early struggles, Minaj has said, helped fuel her drive to rise above the life her parents knew. “I’ve always had this female-empowerment thing in the back of my mind,” she told Details magazine, “because I wanted my mother to be stronger, and she couldn’t be. I thought, ‘If I’m successful, I can change her life.'”

To reach that point, however, the young Minaj developed personas for herself that would allow her to be a “new person.” An early incarnation was someone she called “Cookie,” then came “Harajuku Barbie,” before finally settling on Nicki Minaj. “Fantasy was my reality,” she has said. Minaj clearly had a knack for performance. At the age of 12, she authored her first rap, then went on to delve into acting at La Guardia High School of Music and Art, the school that inspired the movie Fame.

Determined to make it in the music business, Minaj took on backup singing roles for local New York City rappers. Soon, she began writing her own material. She was eventually discovered by Dirty Money CEO Fendi, who came across Minaj’s MySpace page, loved what he heard, and immediately signed her to his label.

That connection led Minaj to Lil Wayne, who collaborated with her on a series of mix tapes, the first of which, Playtime is Over, was released in April 2007. The recording, and subsequent mixed tapes, showcased Minaj’s female swagger and out-front style.

By early 2010, considerable anticipation had built up around Minaj’s much discussed, much covered debut album, which was scheduled for release that fall. In April of that year, she released her first single, “Massive Attack.” Two months later she won Best Hip-Hop Female at the annual BET Awards. She dedicated the award to Lil Wayne.

In 2012, Minaj was announced as one of the newest cast members of American Idol; the singer will begin appearing on the popular television show in 2013 (season 12), as part of the show’s judging panel.