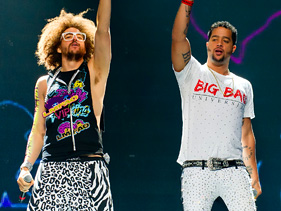 LMFAO made headlines Friday (September 21) after Redfoo told an Australian outlet that he and SkyBlu were going their separate ways for the time being.

“I feel like we’ve been doing this for so long, five or six years. And we’re kind of like saying, well, let’s just do what’s natural and just kind of explore that, instead of like forcing it all the time,” he told News.com.au. “I think that we naturally just started hanging with two different sets of people, two different crowds, but we’re always family. He’ll always be my nephew, I’ll always be his uncle.

“All the music that I’m going to make is always going to be LMFAO-ish … I love all the topics that we talk about,” he added. “I was really passionate about bringing party music to the world, so I will always be making some kind of party music.”

However, headlines implying that the twosome are kaput have been exaggerated, according to a rep for the group. Spin reports that LMFAO’s rep denies they are breaking up, but does confirm they will take some time to work on solo projects. The group hadn’t responded to MTV News’ request for further information by press time.

It’s not the first time this year that the Party Rockers have had to clear up rumors that they were breaking up. Back in April, weeks before they kicked off a tour, they released a video statement, noting that they were planning to continue to fist-pump together.

“You see the stuff they wrote in the New York Post? The crazy stuff, let me read it to you,” Redfoo said. Yet, before he could read the report, SkyBlu grabbed the paper and the two begin to fight for it. The two go back and forth until they join together dancing and shred the paper while proclaiming, “Every day we’re tusslin’.”

While LMFAO will each focus on separate endeavors for the time being, the Wanted recently confirmed to MTV News that they have worked with the guys on their next album. Meanwhile, Carly Rae Jepsen worked with Redfoo on her current single, “This Kiss.”